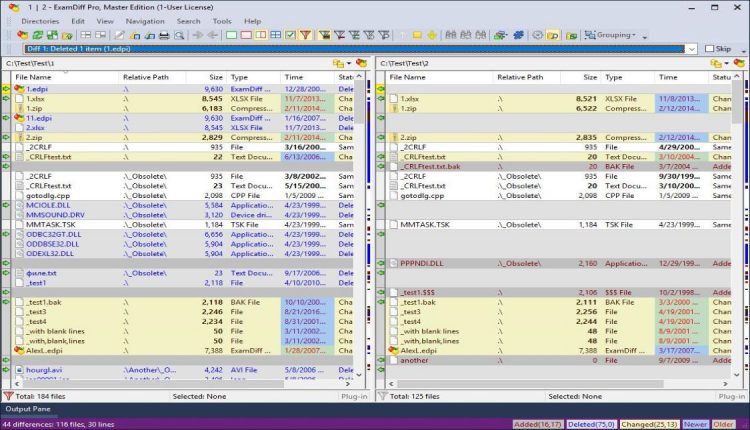 ExamDiff Pro is a strong file and directory comparison software for Windows operating system that lets you compare different document types as well as folders to see the differences between them.

The well-designed interface of ExamDiff Pro includes two side by side windows which is excellent for opening two different documents in them and comparing them.

To do the comparison you only need to open the two files you are going to see the differences between and then hit the compare button. ExamDiff Pro uses fast algorithms to quickly find out the differences and uses different colors to give you a better understanding of the differences.

To open the documents for running comparisons, you just need to open the appropriate documents from the Files menu, or as an alternative you can copy and paste the text of the documents into the double-pane window of the ExamDiff Pro.

ExamDiff Pro has various functions to make comparison easier for you. Syntax highlighting, word wrapping are some of them. It supports various document types including:

The folder comparison of ExamDiff Pro has different options for the user. Some of the options are as:

ExamDiff Pro has a text merging feature too. It lets you use different plugins for file and directory preprocessing before running the comparison.

ExamDiff is a powerful software for comparing Windows files and folders offered by PrestoSoft. ExamDiff Pro has the ability for quickly comparing different versions of documents, syncing your folder, increasing productivity while reducing errors, etc.

ExamDiff software is very useful for webmasters, web designers or for anyone who needs to keep copies of files in two different places.

You can download the ExamDiff Pro from the official website. It offers two different licenses as Standard edition and Master edition which can be purchased at $34.99 and $49.99 respectively.